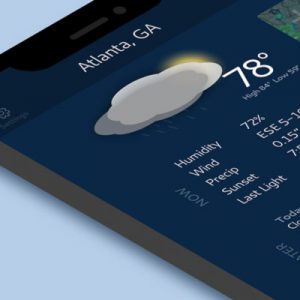 I’m at a ball game, cell phone coverage is iffy and there’s supposed to be a storm on the way. Since it’s a long hike back to the car, I’d like to keep an eye on the weather. With a poor signal, those radar images take forever to load. So the idea occurs to me that a weather app could serve radar images as tiny SVG files. Now those radar images pop onto your screen instantly! Would this actually work? I don’t know, but I can imagine, right?

This amazingly-awesome app that would take the world by, um, storm, needs a nice clean interface. Behold the interface. Okay, it’s really just a quick UI mockup I created in Figma, my favorite UI design app. (Though I’ll have to admit the new isometric design capabilities in Affinity Designer are pretty slick.)